After my last post we headed in to town, wandered round the permanent market stalls and munched a wee bit of currywurst, pommels mit mayo before washing it down with a glass of German red. Germany do produce red wine but they don’t export it – they keep it for themselves!

I can honestly say, I’ve never seen Düsseldorf so busy, especially during the day. Part of this was the fabulous weather but also Die Hoten Tosen (German rock band) played the previous evening at the Düsseldorf arena 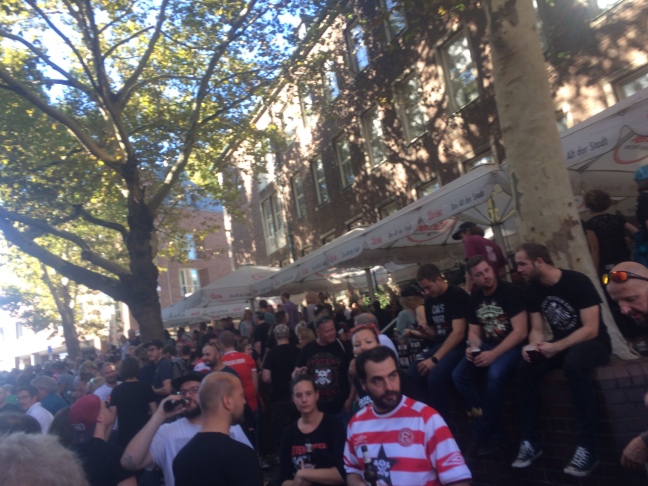 How busy is this – 1230pm Saturday outside the beerkeller

And the steps – a well known gathering place

Saturday afternoon we nipped along the line of parked vans to have a quick chat with the British couple (Henry & Carol) who had let us squeeze into the gap between their van and the next, the previous evening, further along the promenade. That was a mistake- lovely sociable couple from Wigan. 4 hrs later and probably a little too much wine/beer we bimbled back to our van and thought we better have some dinner to soak up the booze.

Sunday saw us leave Düsseldorf just as the crowds started to arrive for the annual fish fair, and, before they blocked us in.

We took a drive down to Munchen Gladbach and found what was JHQ Rhiendahlen (former HQ of the British Army on the Rhine). It was blocked off and obviously guarded – it used to be a public road through it – so we turned around and headed for the old married quarters patch at the former RAF Wildenrath (where I was based 88-91). Again blocked off and guarded, but, speaking to the guards, they informed me that the quarters are occupied by Syrian refugees. No one goes in and no one leaves. – you can check out anytime you want, but you can never leave. Sound familiar? (Hotel California).

After that we headed for Roermond, a pretty Dutch town on the border. The original plan was to stay at a marina, which was walking distance to the town, but unfortunately that appeared to be closed. Next choice was a campsite- 3km from the town (as the crow flies). In reality it was about 7-8 km round country lanes and we wondered what we were letting ourselves in for.

We needn’t have worried- the site was on a very upmarket marina complex with excellent facilities and bar/restaurant (Resort Marina Oolderhuuske). It was that nice (& so sunny) we decided against visiting Roermond (which we’d visited previously on the motorbike) and wandered round the marina, looking at the houses (floating houses as in the winter the water levels rise up to 6 feet – crazy clever Dutch peoples!😊)

View from our pitch 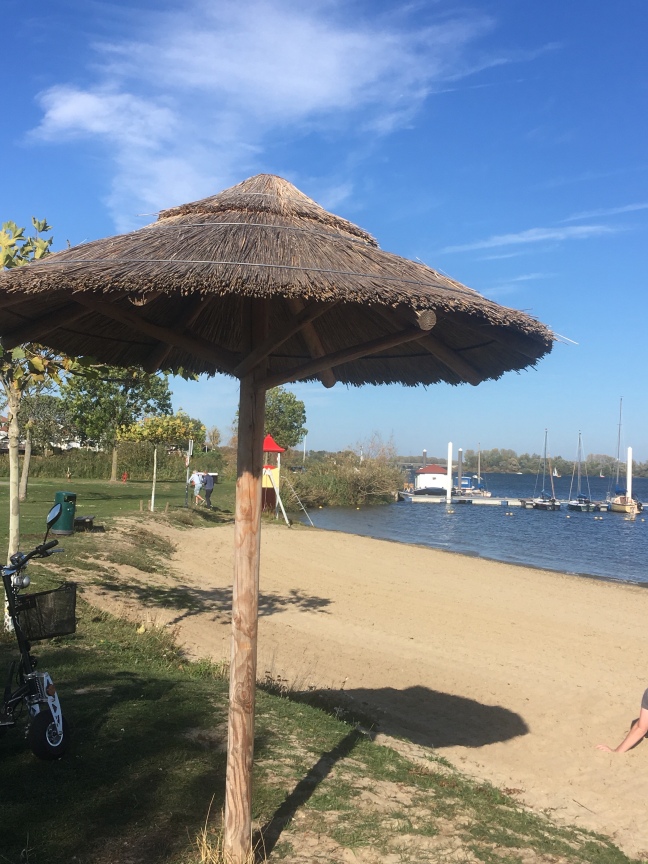 Marina with floating houses behind

We then decided to have our last European sundowners of the trip, followed by showers and a nice bar supper. We would have eaten in the restaurant but it was fully booked and apparently always is on Fri, Sat & Sunday.

Monday morning saw us on the road, Calais bound. During the journey we found out via a text exchange between Sarah and a friend that there was a 3hr delay. The journey was pretty non eventful apart from an accident on the other carriageway (car and lorry on fire. Hope everyone got out!).

We got to the tunnel and were delayed in booking in (due to the 3 hour delay) . Eventually Rockydog was checked at the Pet centre, we were checked in and parked waiting on our slot. We took advantage of this, with Mrs Mac cooking up a tasty dinner before we boarded our train for Blighty. Whilst waiting to get Rockydog checked at the pet centre, 2 large vans arrived. They were from a dog rescue charity and both had 9-12 Romanian rescue dogs on board, all large Husky/ Malemute type dogs, howling, howling and howling. Rockydog being Rockydog just ignored them!

Having arrived in Blighty, we headed for an identified parking spot looking out over Romney Marsh, Kent for a bit of free camping.

Our first mornings view of Blighty

Tuesday saw us up and on the road, heading to meet our friends Katherine & James (who we met in Spain in Nov 2016) who are currently in Farnham. Journey time according to ‘Sally Sat Nav’ 2 hours. Reality, 3.5 hours due to a stupid Lithuanian truck driver who had decided to use the outside lane of the reduced to 2 carriageway motorway (with the outside lane clearly restricted to 2m width!!!!!!) and low and behold he’d side swiped another truck and a couple of cars before becoming embedded, with his offside wheels in the grass between the carriageway and central reserve. Arghhhh.

Eventually moving again, we took a quick detour into ‘army town ‘ (Aldershot) for some shopping before joining James & Katherine at the small farm site for loads of gassing, dinner, more gassing and I think I remember a glass of wine.

Today the plan is to unload Thunderbird 2 and nip over to Hook – only problem is, it’s raining and cold!

We’re on dinner duty tonight and tomorrow, who knows? Maybe the NEC for the Motorhome and Caravan show – Ooohhh sounds expensive 🚐😊

4 thoughts on “Roermond, the tunnel and Blighty”