So, rain it did but the weather had dried up and we set Sally Sat Nav for Mautendauf, an Austrian ski resort where the campsite got excellent reviews and included a ride on the cable car in the price as well as a ‘well being suite’.

The first thing we noticed as we left Bled was ‘there’s snow on them there hills’ – so on the lower ground, we had rain, on the high ground, the first snow of this winter.

We made good time to the Austrian border and expected some form of border control but we slowed down and were immediately waved through. Next stop Mautendauf. I was looking forward to an afternoon cable car ride and a beer looking out from the mountain top. Alas that was not to be. When we arrived at the site, it looked closed. There were notices saying to take an electronic gate card, find a pitch and see reception in the morning but the cable car wasn’t operating, nor anything else (restaurant/bars) and the wind was howling.

Executive decision- we ain’t staying here! So we set off over the mountain pass and through the Obertaunern ski area (1750m) where there was snow on the road verges and the temperature was 3*

We identified a park Platz at Alternmarkt, near Filzmoos where we had skied, guests of our friends Heather & Bob ( aka silver skier). We arrived mid afternoon and wandered into town which felt nicely familiar , we treated ourselves to dinner in a local hotel, choosing the 3 course daily menu (€13.90). It was exceptional . Clear beef soup with potato to start, followed by Chicken cordon blue schnitzel and buttery ( very buttery) parsley potatoes, and finally apple fritters and vanilla sauce. We walked back to the van with that ‘cruise feeling ‘ of having eaten far too much. But it was good!😊 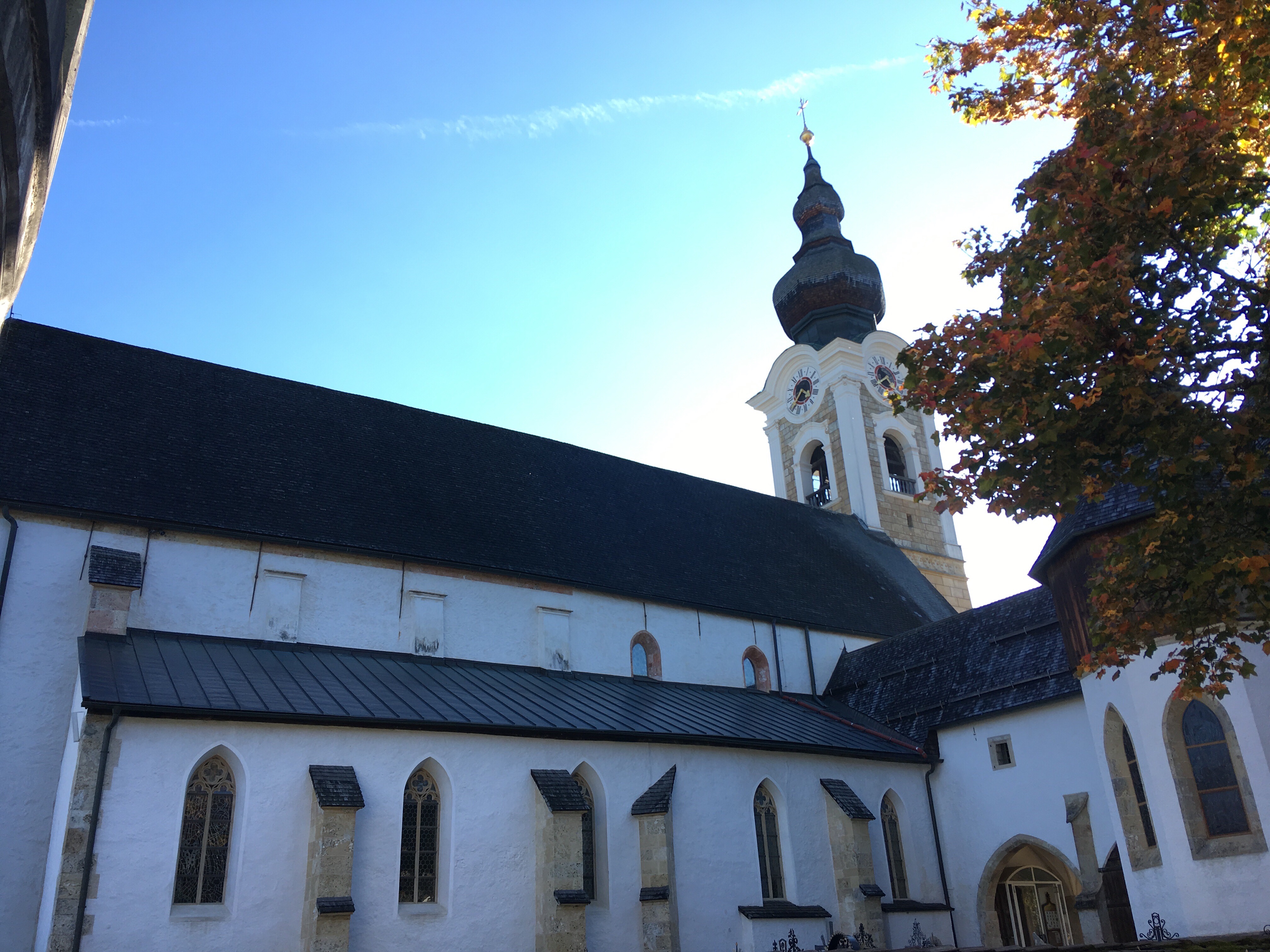 The next day saw us head to Bernau , Germany on the edge of lake Chiemsee (huge Great Lake south of Munich).

As we approached the German border, all the service stations and lay bays were full of stationary trucks. As we approached the border, trucks were being pulled in by police and ‘stacked’ on the hard shoulder. Turns out 3 October was a national holiday- German unity day – celebrating the re- joining of east and west Germany.

We wanted to visit the island of Herreninsel in the middle of lake Chiemsee which has Schloss Herrenchiemsee on it – another one of Ludwig the seconds unfinished castles – he also built Schloss Neuschwansteir that we visited earlier in our trip ( Chitty Chitty Bang Bang castle). The weather was appalling heavy rain and wind so we just parked up and hunkered down. About 4 the rain stopped so we ventured out for a walk along the lake. Our first observation was that this area seemed to be overrun with people on crutches. Soon after it became apparent that a number of clinics adorn the banks and parks of Chiemsee.

After a lengthy walk, with the sun shining, we went for a sundowner beer in a bar/ restaurant that was apparently an old 19th century bathing house. Whilst there a couple sat down near us. I had noticed them earlier whilst walking. He had a red baseball cap on with Scotland on the front. Upon speaking to them, they joined us. Their names were Fuzzi and Doris and he had bought his cap in Edinburgh in March when Doris went to the wool exhibition? He was interesting as he had just retired after 32 years as a croupier at a casino in Wiesbaden. Doris was attending one of the nearby clinics, hence why they were there. A very pleasant couple of hours was enjoyed- made all the better by their excellent English.

The next day (Thursday) we drove the few km to Prien du Chiemsee to get the boat over to the island and visit the castle.The boat ride is about 15 minutes followed by a 15 minute walk to the castle. The castle is modelled on Versailles ( there was some Louise XIV hero worship going on). We had a guided tour in English but alas as most tourist attractions in Germany, no photography allowed. I can tell you this. It was ostentatious, over budget, unfinished, he only spent 10 days there and it didn’t have a kitchen!

And as for the gardens, well, Capability Mackenzie could do a fab makeover with some Astro turf, composite decking and nice block paving 😂😂😂😂

So after our return from Herreninsel we headed for our present location, Bad Aibling, a spa town 30 km south east of Munich and some much needed R&R.

We had a wee walk around the town and decided we would treat ourselves to a long session in the spa and sauna today. And that was what we did. For those not familiar with German spas, they tend to have a clothed swimming area and a sauna + swimming (sometimes) area that’s naked. Mrs Mac chose just to swim in the various heated pools whilst I opted for both. I also participated in the 1300hrs Aufguss ceremony where I have to admit, I was the first to bail out due to the immense humidity- closely followed by at least 3 others!!! – see Aufguss – ritual in the sauna for more info.

So tomorrow, the plan is to stay here and use the train to get to Munich. The Octoberfest is on until Sunday so site availability and motorhome parking are at a premium.

Finally, we love parking on Stella Platz and aires purely for the entertainment factor. We have lost count of the amount of vans that arrive, park up, move, etc etc just so they can get satellite reception. Or the vans arriving late and then appear ‘upset’ as there are no spaces, followed by the crazy parking, trying to get parked. We’re easy amused😂😂😂