Our chosen site at Baska sits on the west side of the town and on the beach. There’s a promenade into town with restaurant and cafe bars and booths offering boat trips, quad biking and all other sorts of tours. Actually it’s not as bad as it sounds and you don’t have to run the gauntlet of Mediterranean style hard sell of come into my restaurant/shop.

The jewel in Baska’s crown is the 1.8km pebble beach and azure blue waters.

The old part of the town consists of a small harbour with very nice looking restaurants opposite the sea. The coastal path continues south to Bunculuka Camping resort , the naturist resort.

Considering it’s just about the end of the season here, Baska was still busy with predominantly Germans occupying most of the pitches. This was evident as we strolled back from town on Friday evening against the flow of pedestrian traffic 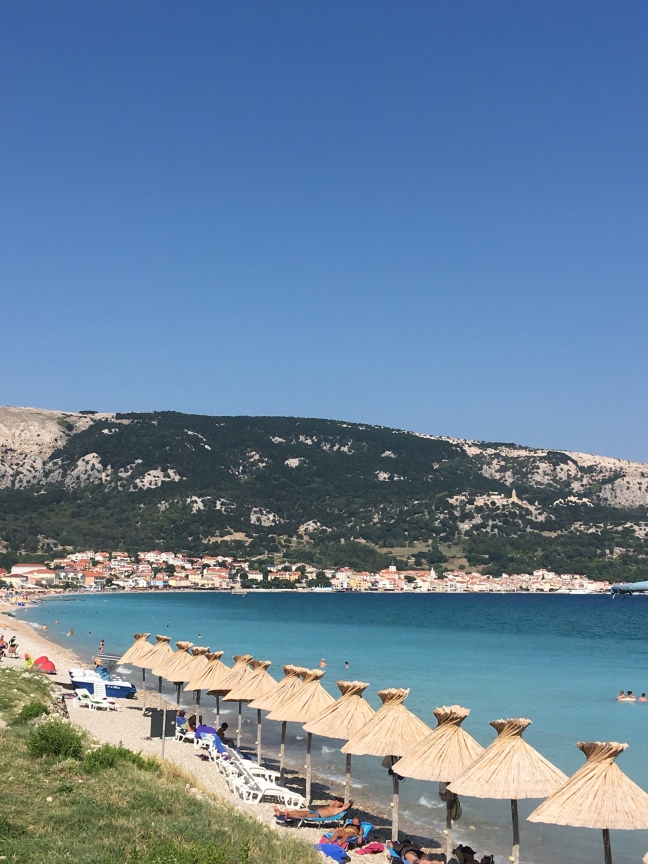 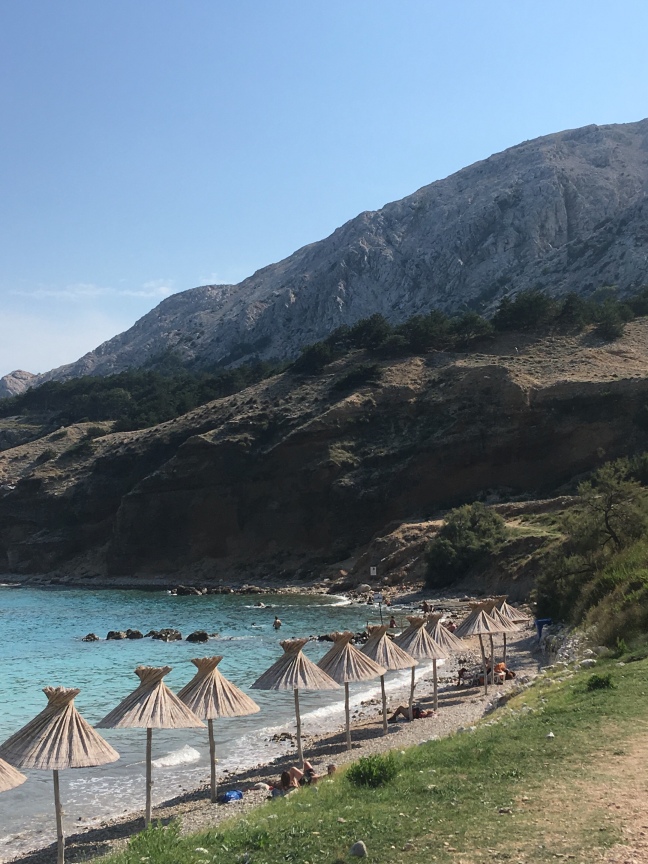 Beach at the campsite

Looking over at the town from the harbour 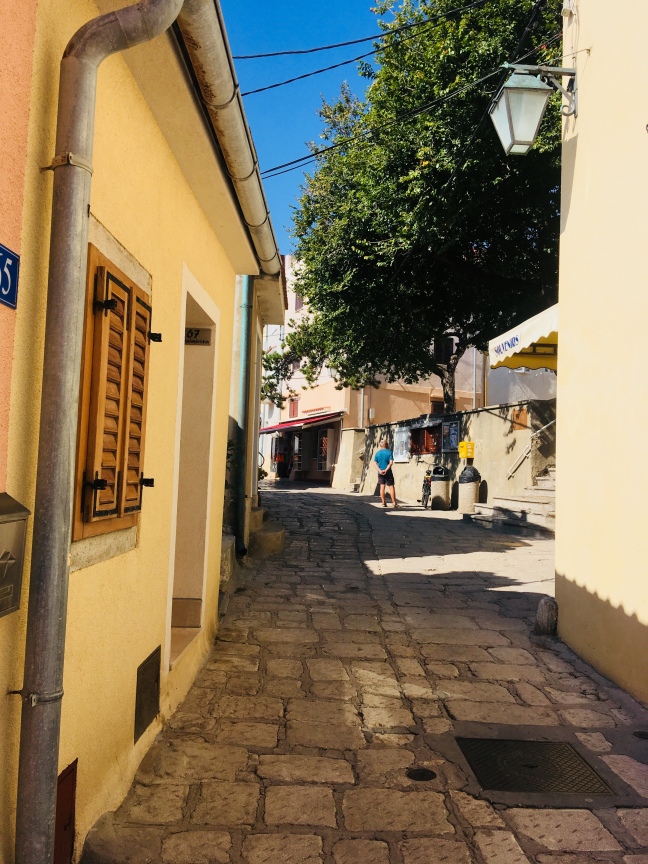 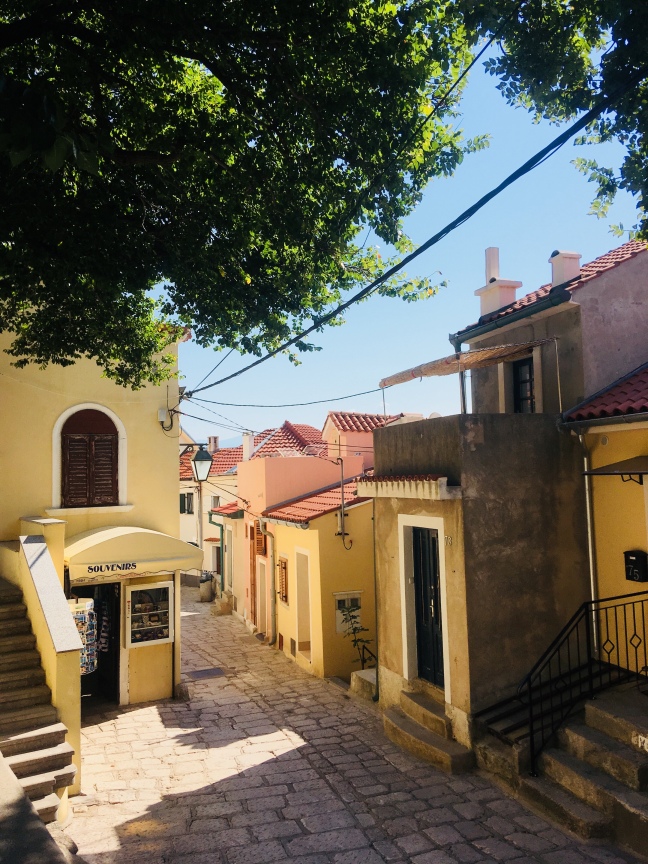 Some views of the town

On Saturday we decided to move off and head over to the island of Cres and the sub island of Losinj ( especially as it had turned windy and was raining lightly on and off).

As we were packing up, our German neighbours engaged us in conversation- interesting as they spoke no English and my German is purely ‘squaddie German . We got by. Transpires he was called Victor and he was Russian. His wife was from Austria and they lived near Hamburg. He then became animated and using his phone intimated to me that Povetkin was going to trounce Joshua in the boxing that night and he was going to watch it on his satellite system. I suppose he was disappointed then!

We left Baska and made for the port of Valbiska for the ferry to Mareg on the island of Cres. We planned to be on the 12:15 ferry. We arrived in plenty of time, booked in and went for coffee n cake. As we headed back to the van, vehicles were already being loaded on to the ferry so we got our act together and drove onto the boat, with it departing shortly afterwards. When we arrived in Cres 25 minutes later, it was apparent that the timetable had gone out of the window due to the volume of traffic waiting to leave the island. 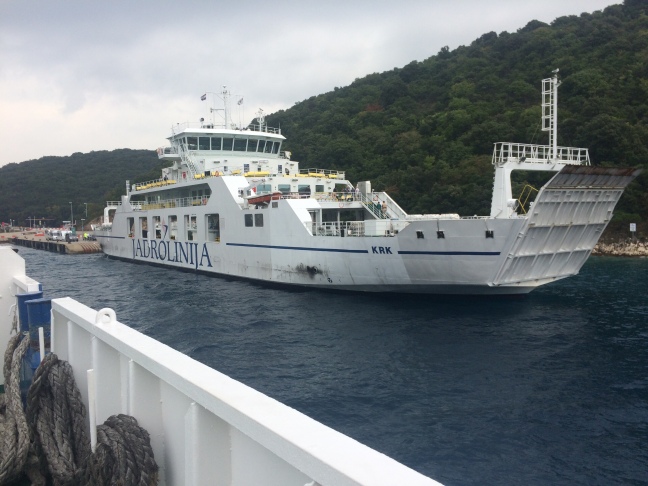 Same as our ferry 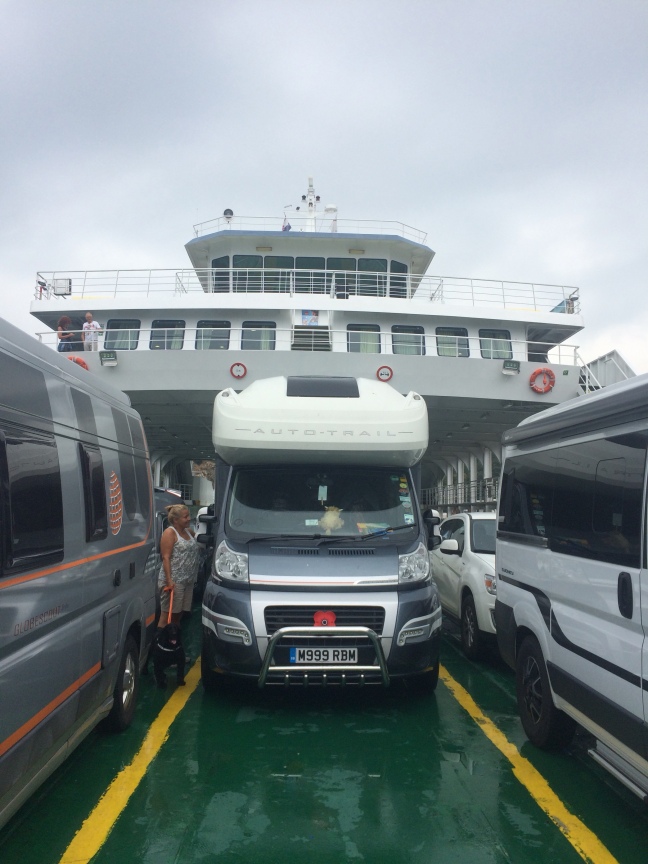 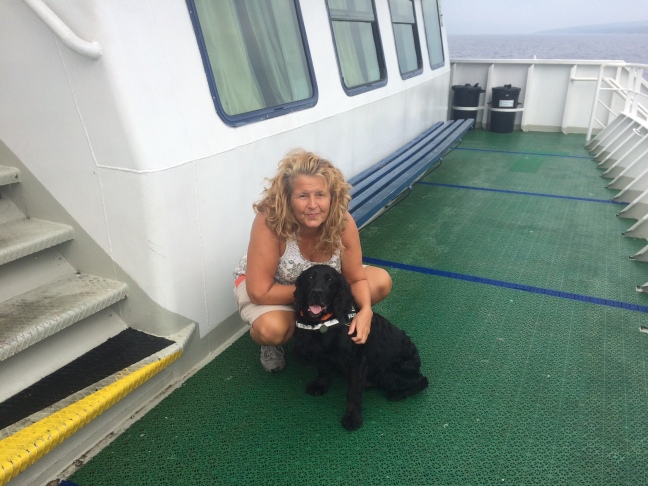 We drove over the island, past Cres ( the main town – we’ll look at stopping in there as we travel back north on the island). We headed for Nazerene along what can only be described as fabulous roads until we got to the bridge at Osar ( more about that in a mo). The last 4-5 mile to Nezerene were very poor, pot holes & uneven.

As we traveled along the waters edge we saw all the sail boats out in the sea taking part in a local regatta. Bizarre really as the weather in Croatia has been calm for weeks but happened to become windy in time for the Nezerene sailing regatta.

Pitched; we walked Rockydog to the dog beach for his daily swim before having a cuppa with Phil & Liz ( from the rally) before heading into the village to see what was happening. The regatta had finished and the vintage sail boats were being put away and the locals were preparing for and evening of music, drink and dance.

We opted for an early dinner as there were fireworks scheduled for 2130hrs and we wanted to be back with Rockydog as he hates them.

A local restaurant ( a street back from all the activities) was chosen and Mrs Mac ordered Sea Bass ( filleted) and I ordered breaded fried squid. To say it was mediocre would be about right. Disappointing really because the restaurant was busy with locals. As we finished our meal we were joined by Phil & Liz and as we shared a drink, the fireworks started ( apparently 2130hrs in Croatia is actually 2015hrs!!!!) so we rushed back to the van to find Rockydog cowering in our bedroom. We’d chosen a restaurant away from the main square as they had music set up and it was ear burstingly loud. However we did see lots of locals heading for the town in local/ National costume and heard music that can only be described as sounding out of tune and a cross between the chanter, a snake charmers pipe and a recorder. Or a better description, bloody awful! It was loud enough from where we were so glad we chose a restaurant a street back!

Rockydog coming out of the sea after his daily therapeutic dip 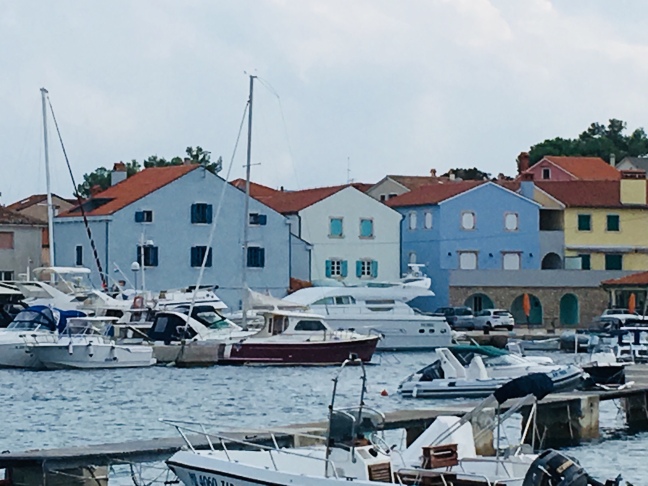 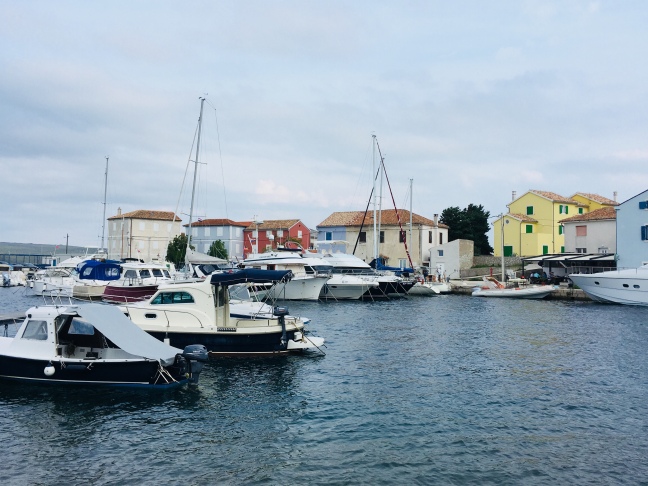 A walk with Rockydog this morning allowed better examination of the site we were on. It was best described as ‘utilitarian ‘ and had a concrete promenade and although the facilities had recently been updated can only surmise that it dated from communist days and if you were a good loyal party member you’d be entitled to go there one summer out of ten!

If you’re a good communist, you can holiday here!

This morning saw a leisurely morning then a move 17km further south to Mali Losinj along what were once again fabulous roads. Upon arrival at our chosen site we had an instant dilemma. A cheap ACSI (camping club) pitch or a double or even three times the cost pitch with a possible, partial sea view. No brainier as it means more money to spend in the bar. And on that note, according to Facebook there’s a Craft beer bar 1 km away, so watch this space.

Finally, back to Osar and the bridge. In roman times there was no need for a bridge as this was one island but to avoid extra sea passage by circumnavigating the island they divided the it by building a canal so the ships could pass through.

Map of our route