Thursday saw a free morning for the group, followed by Strudel and coffee (or wine or beer) in the camp restaurant and a discussion regarding the route(s) to our next stop of Omis on the Adriatic riviera.

Friday’s drive took us down through the middle of Croatia to the coastal city of Split. The land through the middle is very barren and doesn’t appear to support much economy. The roads however are very decent with dramatic scenery and like a lot of the roads here, the are pleasant enough in a 25’ (8M) motorhome but they very probably need re-visiting on two wheels!!!!!

Having arrived at our site in Omis we were able to be parked in a group setting, allowing us a ‘wagon train’ formation with social space in the middle. This however didn’t seem to deter the other residents of the site who seemed to continually cut through our pitches on route to everywhere and anywhere.

Saturday saw us ready for an all day coach trip to visit the ancient fortress of Kliss, overlooking Split and the Adriatic (and also the setting for Game of Thrones) and then a visit to the island of Trogir. Both Mrs Mac and I were blown away with Trogir and feel its a hidden gem – upon entering the walled city (that’s only 500m wide) you are awe struck by the cathedral (and its ornate carved doorway from 1500), court house, old buildings and alleyways. Upon leaving the city by the South Gate you are on the main promenade with bustling bars and restaurants and many small cruise boats being replenished with supplies and passengers for 7 day cruises around the Adriatic islands.

A meal was also included in this trip with the choices being fish or meat. That should have been whale or whole pig! Needles to say, there were lots of left overs so a ‘doggy bag’ was requested and the contents shared between Rockydog and Mick (west highland terrier) the other dog in the group. 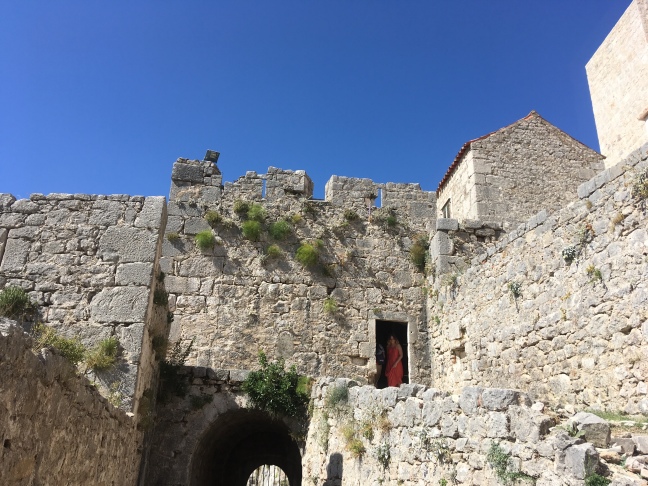 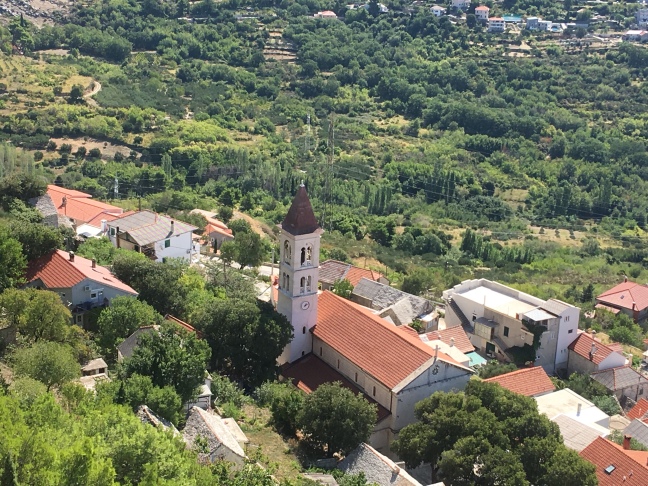 View down from the fortress 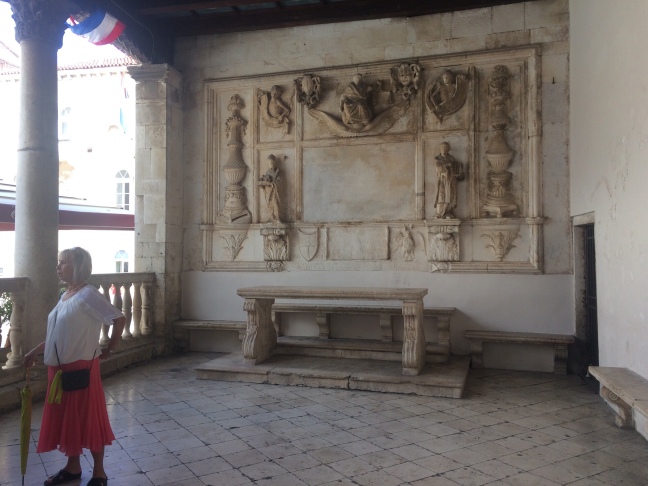 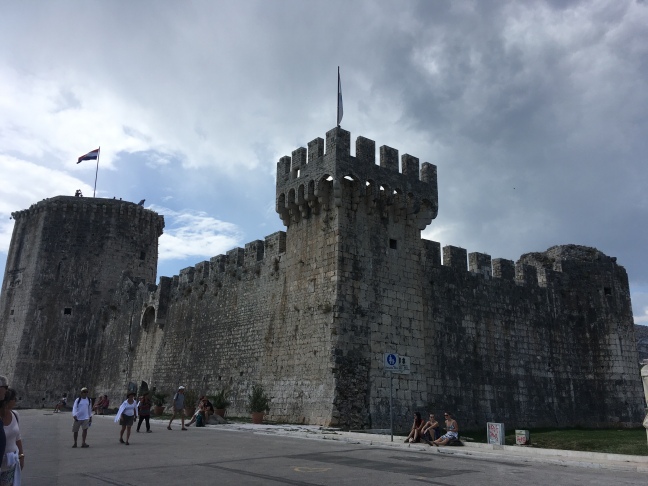 The castle at Trogir 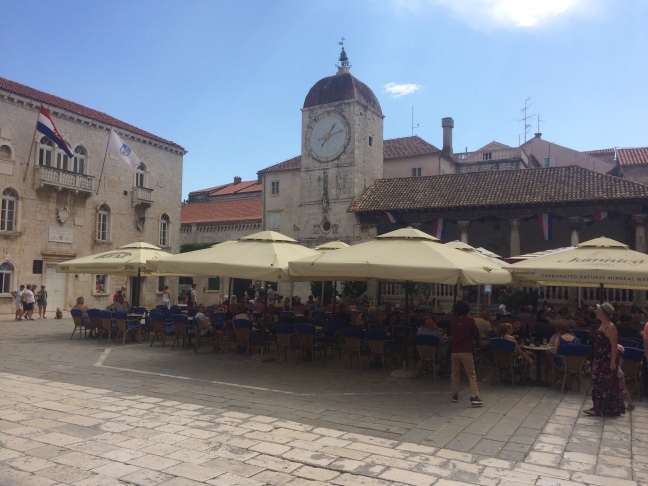 Views of the square

Sunday was a free day so we unleashed Thunderbird 2 and headed south along the Adriatic highway for about 15 miles exploring the roads and a number of the bays and stopping for a nice seafood lunch in a small village overlooking the harbour. This was another day where due to the temperature we were again riding in shorts and T shirts and although it goes completely against the grain, all I can say is, even in that clothing, its like riding in a massive hairdryer on full heat!

View from the Adriatic highway 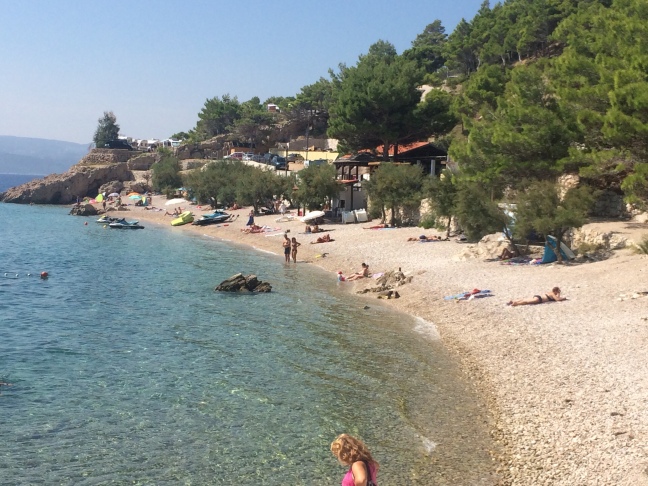 And the beach below 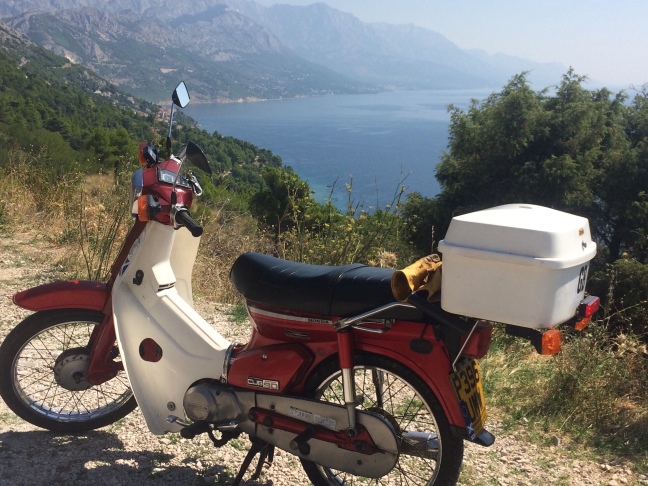 Thunderbird 2 with Adriatic coast in background 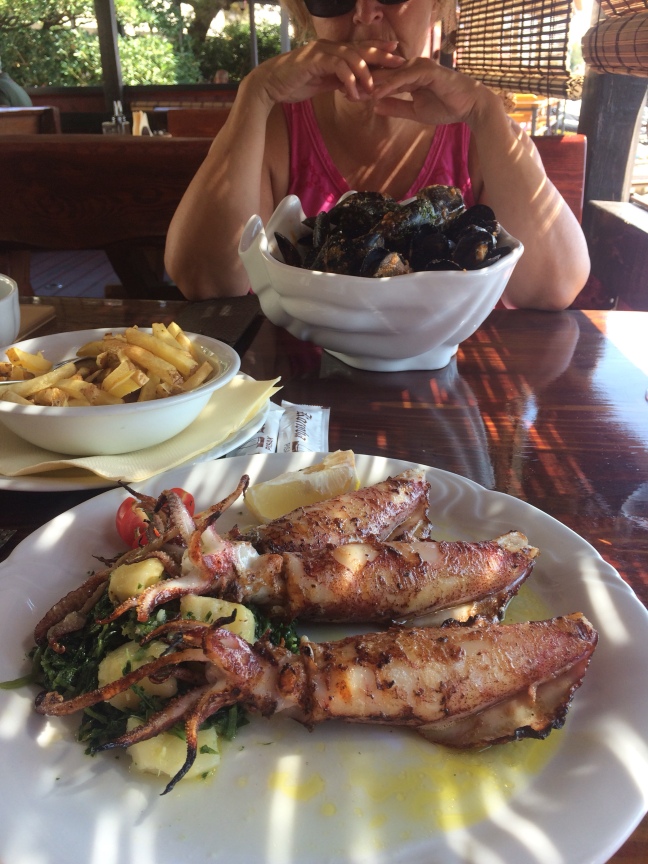 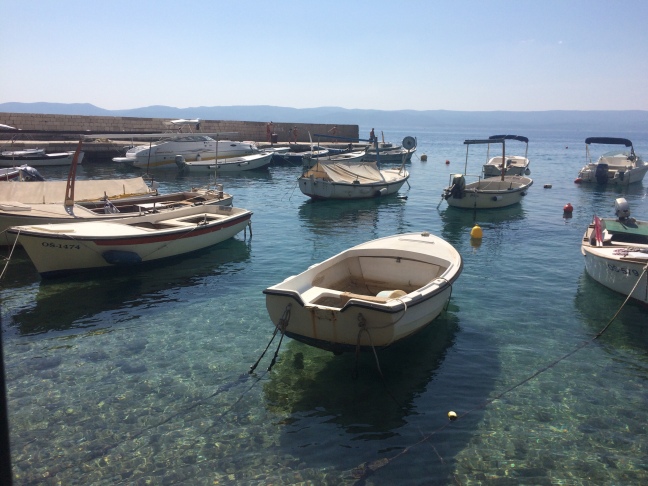 And the lunchtime view 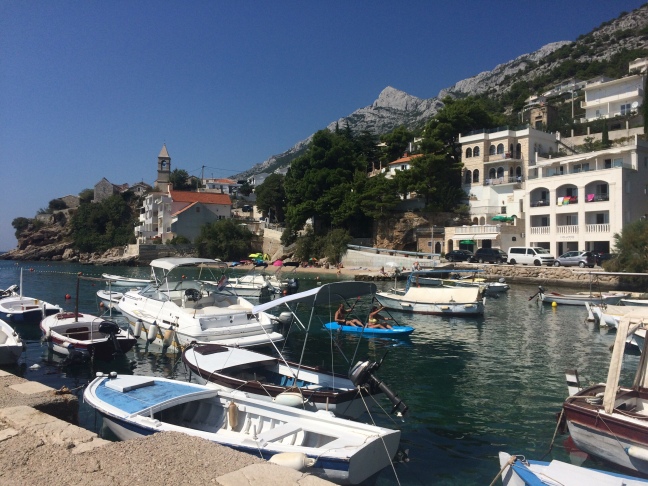 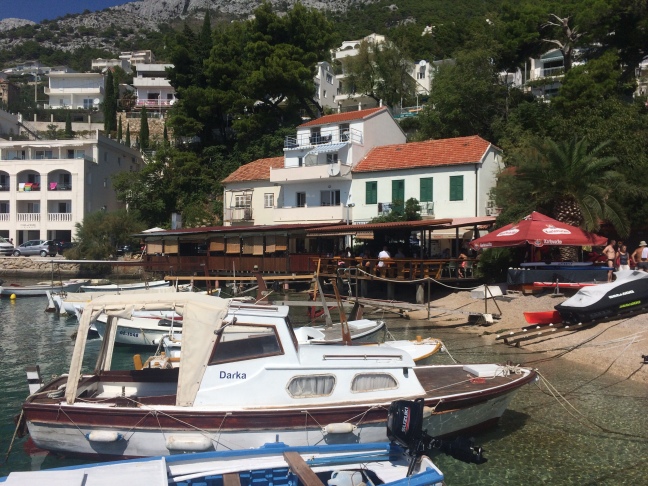 Monday saw a group boat ride along the Celina river (main river that runs into the sea at Omis) with lunch at an old mill (now a restaurant) about 5 miles up stream. This gave us fabulous views of the mad folk free climbing on the vertical rock faces and watched in awe as people ‘zipped’ along the 7 zip wires traversing the gorge (the longest being 750m long and 150m off the ground) – another must when we return! 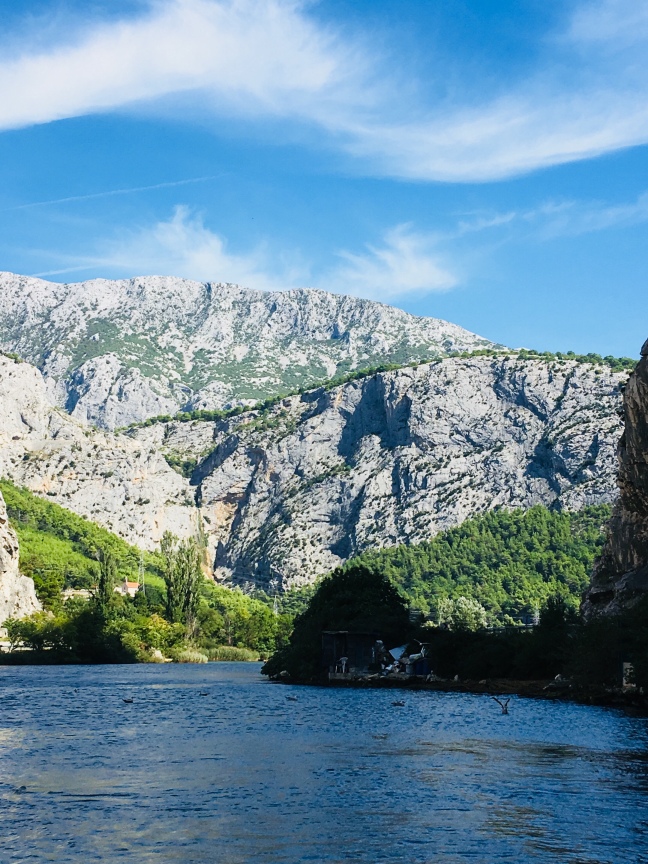 Views along the river

So far, Omis has been Rockydog’s best site because he’s been able to swim everyday and I even swam with him on a couple of occasions, however I don’t think he was impressed at my doggy paddle.

Rockydog with his big stick – he’s brought it with him.

Monday evening saw us meeting up with friends (Mary & Tony) who we met in Benicassim, Spain in 2016. We had drink in a lovely rooftop bar overlooking the marina before heading into back streets (that reminded me of a middle eastern medina/bazaar (previous influence in this country maybe?) for a nice meal and the most fantastic ice cream rolls for desert. (Thin strip of freshly made ice cream and rolled into a tube, similar size to a large brandy snap).

Tuesday was an early start and the 400 km drive to our present location, Kirk Island. This was achieved using a mixture of the Adriatic motorway and the Adriatic highway (coast road). The first part of the drive, the motorway, Mrs Mac undertook and allowed me to stare at the mountain ranges in the distance and the coast in parts where it was really high.

I undertook the second part of the journey on the Adriatic highway and whilst the scenery is dramatic, progress can be painfully slow and impatient drivers (local and tourist) mean that you constantly have to have your whits about you.

The majority of the traffic was south bound (nearest to the water) and I would suggest that 80% of that traffic was motorcycles (of all sizes and riders in all manner of attire – including one girl perched on the back of a large sports bike in what appeared to be shiny spandex/pvc trousers, flip flops and not much else!

Our lunch stop on route

We arrived at Kirk island and got settled prior to todays activities. They started with a group brunch – instigated by yours truly as we had been carrying 3 haggis (or is that Haggie?) around in our freezer without opportunity to eat them. It was a great success with different people cooking different ingredients and getting it on the serving table for 1100hrs – scrambled egg, fried tomatoes, beans, sausages, fried potatoes, bacon and haggis. And pretty damn good it was too. Great preparations for this afternoons wine tasting (with cheese) in the sites restaurant. 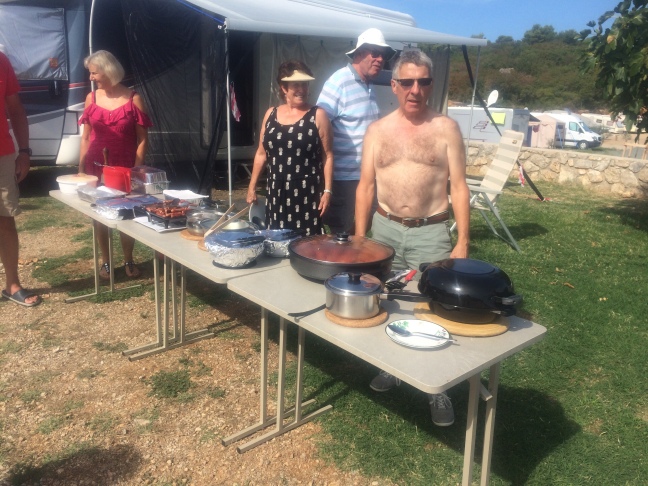 2 thoughts on “Omis to Kirk Island”