Firstly I’d like to thank those of you who have left messages/ comments- appreciated. Thought I was just wasting my time. Also I meant emoji, not imoji – I know that confused you Derek😂

This morning we were awake early, probably due to the start of the traffic on the road leading to the Grossglockner which is immediately adjacent to our camp site.

We seized the opportunity for an early morning walk in the cool temperature round the village with Rockydog.

Me & Rockydog outside the municipal fire station – it was an immaculate brand new building with all new appliances.

More photos from around the village 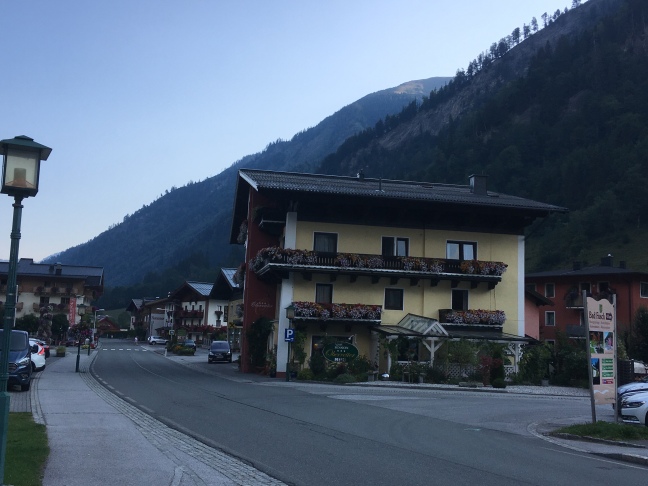 After a nice walk, Sarah and I tucked into a very nice cooked breakfast ( bacon, black pudding (for me), haggis & fried eggs) cooked outside and washed down with fresh coffee & tea in preparation for our mission today. Mission, ride the Grossglockner on Thunderbird 2.

We set off from base camp (Fruch) which is approximately 825m above sea level with the aim of reaching the bikers point (& the highest point 2571 m above sea level) of the Grossglockner, 2 up on Thunderbird 2, our 1997 Honda C90 Cub, (7.5 bhp). The Grossglockner High Alpine Road (it’s official title) is 48 kilometres long with 36 hairpin bends and gets to a height of 2571 m.

I’m pretty sure others have attempted similar feats with similar vehicles but I’d never heard of anyone doing it, so thought why not? To be honest, I was a little apprehensive after out trip up to Eagles Nest car park on Saturday but had sussed out that that it would be 1st gear all the way and ‘gently does it’ with the revs. No point screwing the nuts off it as you only feel the need to change up and then it reduces speed and you’re back into first! I had also thought about various scenarios in the event of the engine or gearbox going BANG etc etc etc. Although we do have ADAC recovery, it’s still good to think things over.

So we set off about 10.20hrs and made our way up to the toll booths of the Grossglockner- a journey managed using all 3 gears at times!

Me and Thunderbird 2 at the toll booths 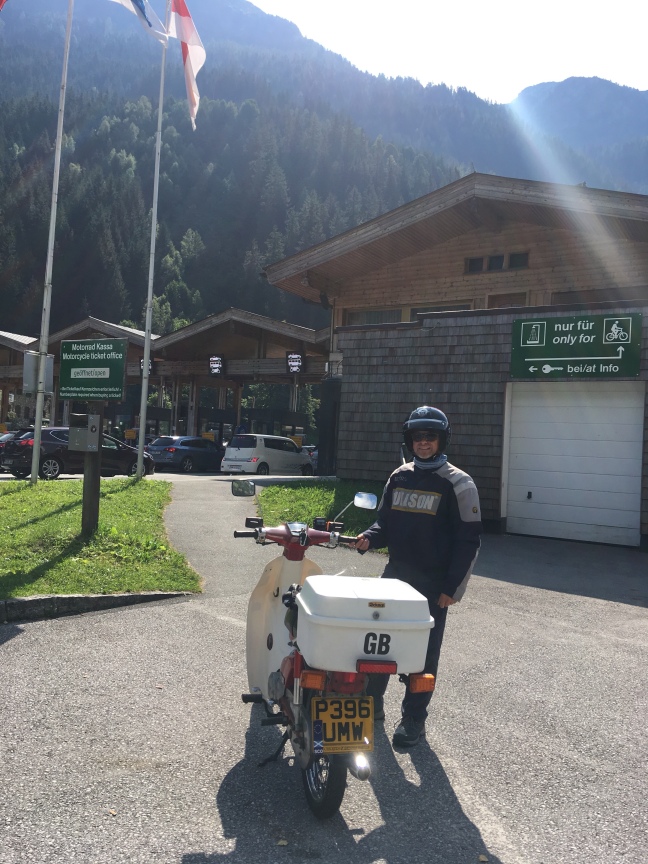 I have to say, we received loads of encouragement from other bikers and car drivers, many of whom applauded as we leap frogged each other at the various view points.

We continued our journey upwards with Mrs Mac hanging off the back, waving at all and offering heaps of encouragement to those entrepid cyclists ( the majority of whom were ‘older’ and on real bikes, not electric cycles.

Some views from about 1/4 of the way up 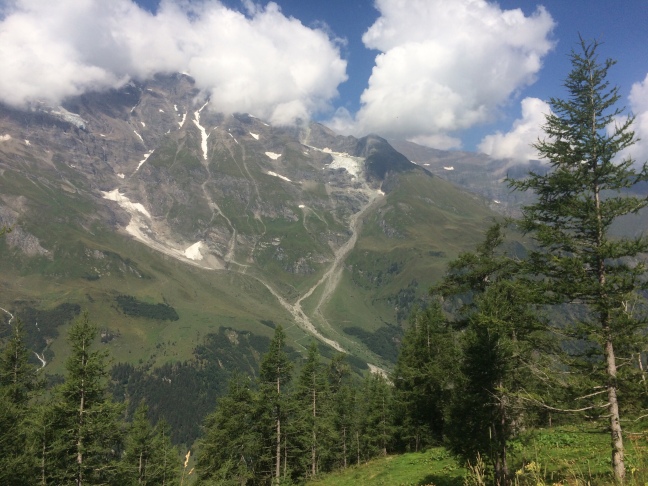 Further up, we’re getting there. 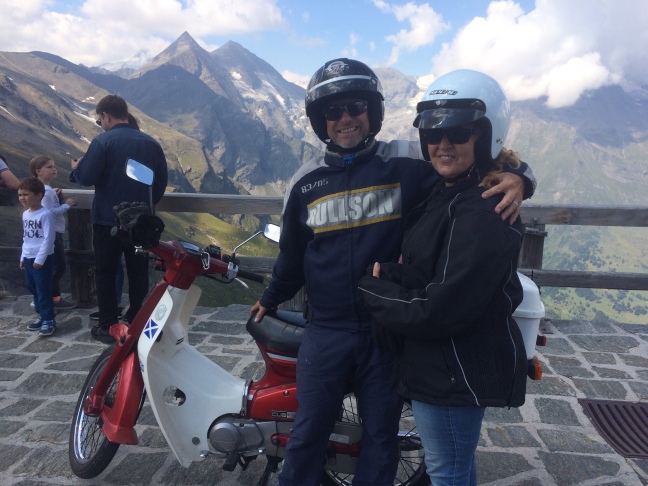 But that’s not it, the bikers cafe is the highlight point is negotiated up a separate narrow and cobbled and hairpinned road to eventually get you to the 2571m above sea level. Having arrived we took a few more photos ( noting of the 100 os so bikes at the top – the Cub appeared to be getting more attention than most).

The only other bike getting attention was a BMW army outfit complete with machine gun and rider in German uniform and helmet – unfortunately he was just leaving as we arrived so never had chance to get a piccy. We later saw a similar contraption, this time a URAL (Russian copy of BMW) with the rider also in Red army uniform. 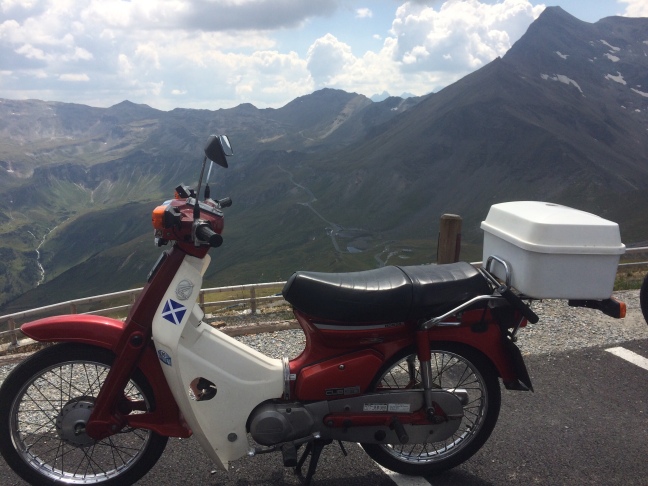 Before we left the top I sent a message to Denis who I bought the Cub from (I had made him aware of our plan) informing him that we had done our challenge.

We then set off down the hill, using 3rd gear ( what a novelty) and lots of brakes with Mrs Mac still actively encouraging the cyclists on the uphill struggles and waving like the queen to all other road users. We also saw a convoy of small tractors towing micro caravans heading for the top as we descended and I thought we were crazy’s! 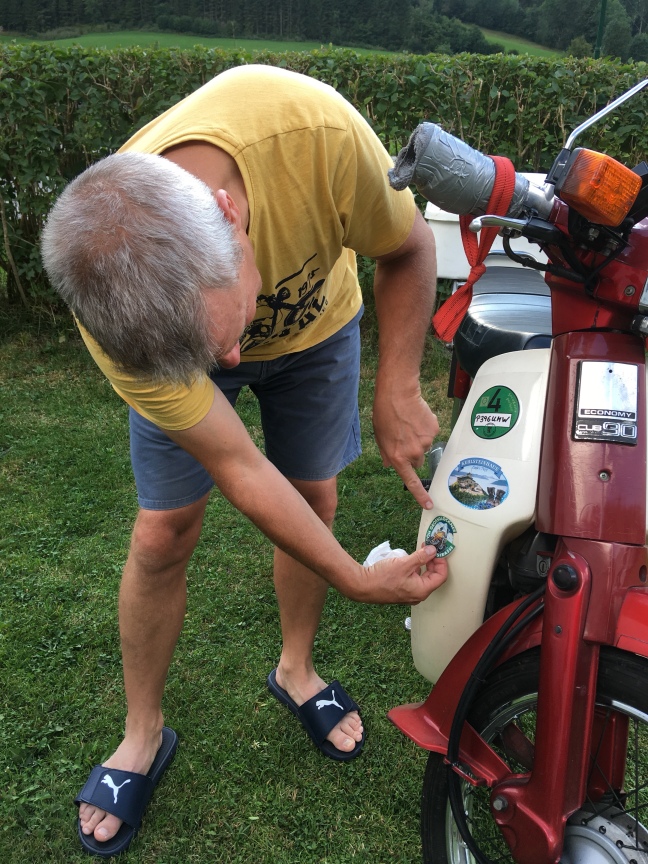 Finally, Mrs Mac can’t think of when she’s been involved in anything so crazy. Heyho, stick with me kiddo, there’s more to come😊

5 thoughts on “Fusch & the Grossglockner”